Why Americans Should Give MEDITATION Another Try 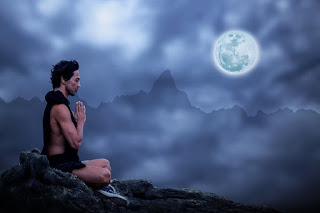 Wikipedia defines meditation as:
"A practice where an individual uses a technique – such as mindfulness, or focusing the mind on a particular object, thought or activity – to train attention and awareness, and achieve a mentally clear and emotionally calm and stable state. Scholars have found meditation difficult to define, as practices vary both between traditions and within them."
There have been hoards of scientific research studies conducted that conclusively prove the effectiveness of Yogic practices on mind and body. One article proclaims 76 benefits of practicing meditation and mindfulness (https:// liveanddare.com/benefits-of-meditation). There is no doubt that yoga is beneficial-this is well documented as fact by the medical and scientific communities. Why then hasn't America taken to the ancient and respected science of Yoga in a bigger way?

Posted by Nina Bingham at 10:25 AM No comments:
Email ThisBlogThis!Share to TwitterShare to FacebookShare to Pinterest
Older Posts Home
Subscribe to: Posts (Atom)